Today continues on in the long, arduous, controversial trek that is iodine.  For this post, I had wanted to take a critical look at how iodine affects fertility, both male and female, and pregnancy.  The post was too long, so I am splitting it into three parts.

I spent a long time searching about fertility and iodine, and thus my absence in publishing blog posts lately.  One article and question always leads to another and another.  Despite looking high and low, I will make no great conclusions regarding iodine and fertility.  Sorry.  Hypothyroidism (low functioning thyroid gland) and hyperthyroidism (over-functioning thyroid gland)  clearly do play a role in male and female fertility, but connecting the dots to iodine has not been performed much yet in research studies.  However, we DO know that iodine deficiency is one cause of hypothyroidism.

My take, off the  cuff, without sources and science, regarding iodine

Although we absolutely need iodine, our bodies seem to become adjusted to regulating our thyroids and bodily systems based on how much iodine we give them.  Our bodies make do, down-regulating this pathway and up-regulating that pathway, until a critical iodine low point at which the system fails and you see the serious consequences of overt hypothyroidism and offspring with severe deficits, such as mental retardation.  Before that severe iodine deficiency crisis hits, there are varying degrees of “normal” a body can manage to function at in different people with the iodine amount provided–which probably aren’t really “completely normal” functioning states but good enough to sustain life and reproduction with little noticeable compromise.

To significantly replace iodine at this point, when a person is “low in iodine” but functioning “okay” (where the body has managed to find a nice “homeostasis” regarding iodine use), can do one of three things.  It can:

If a person is already hypothyroid from low iodine intake, even if mildly so, hopefully iodine replacement will allow the body to start optimizing its iodine use for improved thyroid function and the functioning of other tissues that use iodine, such as the ovaries, breasts and prostate without any ill effects.  In fact, most people do fall under the umbrella of tolerating iodine supplementation just fine and benefitting from it, but doctors worry a lot about iodine bringing about hypothyroidism and hyperthyroidism in what were observably “normal” people.  And this does happen.  Cruise the internet for research studies and iodine supplementation anecdotes, and you’ll see good and bad outcomes.  (To optimize replacement with the least amount of negative thyroid response, iodine supplementation needs to be taken along with some other important co-nutrients: selenium, vitamin C, and zinc.  This is a topic for another post.)  Iodine is a mixed, controversial medicine bag.

As an obvious reminder, don’t use anything in my posts as medical advice, only use it for introductory informational purposes.  The internet is a not a doctor.  And there can be huge risks from implementing what you find on internet health sites.  Walk cautiously, and find a healthcare person you DO trust to talk things over with.

Iodine deficiency erratically riddles the population of developed societies.  Why?  Who is at risk?  Am I?  Are you?  Why do they say we are “iodine sufficient” if we are not?

Why would well-fed people be iodine deficient?

(I am omitting the discussion of goitrogenic foods and halides, which put people at risk for iodine deficiency disorders, 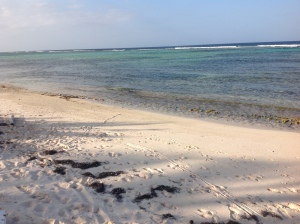 despite adequate iodine intakes.  I will discuss those in later posts.  It is an important topic which needs its own post.)

Real food iodine sources primarily include dairy, eggs, ocean seafood, and seaweed.  Iodine can be a dietary toughie to get because levels of iodine fluctuate greatly EVEN IN THESE REAL FOODS.  I would like to contrast this with nutrients such as B vitamins and magnesium, which although they are diminished in our modern food sources, they are abundant in MANY, diverse food sources which people eat, especially real food advocates.

Who is at risk?  Examples.

If you stop and think, you can easily identify why people would be iodine deficient:

Case 1:  An American woman who is dairy-free, doesn’t like seafood, and who has switched over to non-iodized sea salt because she thinks it tastes better.  She still eats bread, but her bread has no iodine, and in fact does use a bromine derivative for dough conditioning.  Hopefully she eats eggs and lives on the coast.

Case 2:   An American college student who eats only bagels, cereal bars, or Pop Tarts for breakfast, sandwiches with chips at Subway for lunch, and some freezer-kits for supper.  All these processed foods may not provide enough iodine, since non-iodized salt is used.  Hopefully, some iodine is sneaking in through the cheese and eggs used in the products chosen.  But we don’t know.

Case 3: A family in Australia who eats strictly organic, without realizing that studies show that organic dairy has less iodine, organic bread in Australia has no iodine, and their fruits and vegetables are grown in an iodine depleted area.  They worry about mercury and radiation in seafood, and one child has an egg intolerance/allergy, so they shy away from eggs.  I’m not sure where this family gets enough iodine.  Maybe they take a multivitamin.

Case 4:  A 67-year-old man who has lactose intolerance, who shuns salt because of blood pressure issues, who only eats the egg whites (not high in iodine) due to cholesterol concerns, and whose wife doesn’t like fish at all.

Case 5:  A vegan who eats no dairy, no eggs, no meats, and no seafood.  She could eat seaweed but doesn’t like the taste.  Iodine intake is not lookin’ good.

Why do they say we are “sufficient” if we are not?

(Emphasized phrases are bolded by me.)

From The Proceedings of the Nutrition Society, 2010:

The WHO [World Health Organization] prevalence data emphasise that iodine deficiency is not only a problem of developing countries; the highest prevalence of iodine deficiency is in Europe (52.0%), where the household coverage with iodised salt is the lowest (approximately 25%), and many of these countries have weak or nonexistent control programmes for iodine-deficiency disorders. (1)

and The American Journal of the Medical Sciences, 2009:

IDD [iodine deficiency disorder] can occur in iodine replete-environments. A high index of suspicion is needed to recognize these cases. It is pertinent that the correct diagnosis be made to avoid unwarranted life-long thyroxine therapy in patients presenting with goiter and hypothyroidism, which is easily treatable with iodized salt. These cases underscore the need for considering iodine deficiency in the etiologic diagnosis of goiter and hypothyroidism, even in iodine sufficient regions. (2)

From my research, I am concluding that iodine deficiency is insidiously surfacing in individuals and small subpopulations (for example, pregnant women, vegans, or those with multiple food intolerances) in many developed countries, probably riddling whole populations like a shot-gun due to unique dietary patterns and habits of individuals and their families.  How is it that the medical community, chomping on their brominated office donuts, sipping their Coffee-Mate tainted coffee, and brushing their teeth with fluoridated Crest, may be slow to recognize this?  (Yes.  This was me.)  Well, when the scientific community prudently checks to see if an area is getting enough iodine, they look at levels as a POPULATION, not in individuals.  To determine the iodine sufficiency of an area, “on-the-spot” urines are checked for iodine in a sample of hopefully “representative” people.

Spot checks of urine for iodine content are known to be erratic and insensitive, so they can’t be used to determine true iodine status of an individual, but when they are collected and pooled together an overall snapshot of the area (or population) in question can be gained.  The median (That’s the number that occurs in “the middle” when all the result values are lined up from smallest to greatest–it is not the average/mean.) is then used to determine if the tested population is iodine sufficient.

The median value determined can still “hide” a significant amount of the population who may be deficient.  What values are on the low side of the median?  How low do they go?  If most people in the community who are checked use iodized salt and drink milk, well, those folks are probably iodine sufficient and pooled results tell the researchers that “all is well.”  However, if you and your family don’t drink milk and skip iodized salt, plus you all hate seafood, your low urinary iodine spot check will be lost on the low side of the median.  You’ll be told your community or population is iodine sufficient, and you won’t change a thing you eat.  Iodine deficiency affects us as individuals, but unfortunately, iodine evaluations are made based on populations.  True, accurate testing in individuals is pretty intensive.  It requires a 24-hour urine collection, and so just getting “eyeball” spot urine results and pooling them together makes the most sense for determining a society’s iodine status. (3)

So as I did in the last post, I encourage you to take inventory of your family’s commonly eaten foods to see if you may be at risk for mild iodine deficiency despite your government and medical societies saying: “There is no concern of iodine deficiency in the United States (or Australia, France, etc.).”  I’ll bring a wealth of information eventually on iodine to the blog, but it takes me time.  Meanwhile, just explore your diets, and make sure you’re getting some foods which usually have decent sources of iodine.

Remember, food counts.  It really matters.  It matters for you and your family and their families to come.  Let’s move on to iodine and fertility tomorrow-ish…