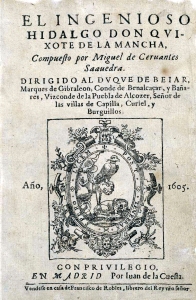 When my husband really decides to do something, he has a singular focus that only a few people in life can understand. I don’t. I’m slow and steady and persistent. He’s “cut the drivel” and do it now. Can be quite intimidating and abrasive for those who don’t get it. But once you recognize it as a signature style, it’s actually kind of fun to observe! Anyhow, he decided to learn Spanish about ten years ago. That meant if you even looked like you spoke Spanish, he would strike up a conversation with you in Spanish. He had a few fails, especially on people with Latino background who didn’t speak Spanish. (So much for not profiling…) He should have been embarrassed, but the thing is, he didn’t care! He was learning Spanish and wanted to practice whenever he could! Oh, but his wife and kids blushed. I mean, at the Mexican restaurant, people would be looking around for their food, and there would be my husband holding up their server with his Gringo Spanish. Eventually, though, we quit being embarrassed, decided to follow along, and now make friends at every Mexican restaurant we frequent.

I myself started learning Spanish about thirteen years ago during my fourth year of medical school. Fourth year medical school is the best year of your life, as all you do is “fun” rotations that you pick out. Plus, you get travel time to go to interview at residencies. That was the year I asked a Spanish-speaking bank teller if she knew anyone who could help me learn Spanish. I was encountering dozens of patients who only spoke Spanish, and I wanted to bridge that gap a little but didn’t know any Spanish speakers with time to help me learn. She put me in place with a pastor who was teaching his congregation English, and my foot was in the door. I still remember driving to sketchy neighborhoods at night and eating cactus and menudo (tripe; beef stomach).

That’s briefly our Spanish story. Both my husband and I decided that our homeschooled kids needed to learn a foreign language, and Spanish made the most sense. In general, we are very practical people. Being practical, we also know that the best time to learn a language is as a kid. We had moved around and it took a bit of time to find a tutor because, and this is my personal opinion, there is a general distrust between cultures and perceived social classes. But we found a native Spanish speaker to come to our home and spend time with our young children speaking only in Spanish. (She and every single one of our tutors have been amazing people. Each different. But each amazing.)

My oldest has been learning Spanish for about eight years now, and we finally just enrolled her in formal on-line lessons. Up to this point, everything has been done in our home by native speaking Spanish tutors who have had no training in teaching. They were just people who spoke Spanish as a primary language. I’d like to share our homeschooling Spanish experience for others to read who may be embarking on this second language trek.

We have four daughters, the oldest started learning Spanish at five years old. My second daughter was about 3. My third and fourth daughters will have been exposed to Spanish since they were born. I’m not a linguist. I’m not a teacher. I don’t even speak Spanish fluently, probably not even English either, compared to many of you! This is just my story and experience. I’ll run it in several pieces as it gets long.

Do you need a tutor who is a native speaker?

Until a few months ago, all of our Spanish tutors have been native speakers. This was a Spanish tutoring deal breaker for me. They had to be native speakers. Why? Well, our ability to hear language sounds and make our mouth, tongue, and palate reproduce them is strongest in infancy and childhood. As we age, this ability goes away, and any new language sounds that we encounter will be spoken by us with the closest sounds available to us from our own language. The later we learn the language, the greater the guarantee we will speak with an accent.

For example, I’ll never really be able to roll my r’s to say a word like rio; I’ll just consciously soften my r sound and add on some softened, repetitive d‘s (or t’s, both similar English sounds), like we do when we quickly speak the word batter.  As an aside illustrating story, my American aunt married a native German when she was 20. She moved to Germany with him and has lived there exclusively over 50 years. She tells me that Germans still tell her it sounds like she’s speaking with mashed potatoes in her mouth. Accents stick, and sadly, even when I am choosing my Spanish words correctly, some Spanish-speakers simply can’t understand me.

So I demanded a native speaker so my girls would not have a strong accent. Now that my oldest is 13, her Spanish is reported to me to be little accented by native speakers (maybe even “non-accented,” according to some). We have made the leap to transition her to on-line teaching, and the man is not a native speaker. This no longer bothers me because her “Spanish voice” is now ingrained, she continues to hear native speakers routinely, and now she needs to focus on grammar and progressing in her use of verb tenses.

For me, I believed in immersing my children as early as I could and as frequently as I could so they could get the SOUNDS EMBEDDED in the neural pathways of their brain and the CONNECTIONS WIRED to their mouths. Grammar and writing was not important to me early on. That is becoming important now that my oldest is maturing in her Spanish language, and so we have chosen an on-line tutor now who is not native that I know is strong in grammar skills.

For the fact, science-minded people, here’s an excerpt from a neuroscience book that you can read pieces of on-line:

Very young human infants can perceive and discriminate between differences in all human speech sounds, and are not innately biased towards the phonemes characteristic of any particular language. However, this universal appreciation does not persist. For example, adult Japanese speakers cannot reliably distinguish between the /r/ and /l/ sounds in English, presumably because this phonemic distinction is not present in Japanese. Nonetheless, 4-month-old Japanese infants can make this discrimination as reliably as 4-month-olds raised in English-speaking households (as indicated by increased suckling frequency or head turning in the presence of a novel stimulus). By 6 months of age, however, infants show preferences for phonemes in their native language over those in foreign languages, and by the end of their first year no longer respond to phonetic elements peculiar to non-native languages. The ability to perceive these phonemic contrasts evidently persists for several more years, as evidenced by the fact that children can learn to speak a second language without accent and with fluent grammar until about age 7 or 8. After this age, however, performance gradually declines no matter what the extent of practice or exposure.

That’s it for today. I’ll follow with the rest of the Spanish posts in readable bits. Everyone, take care!