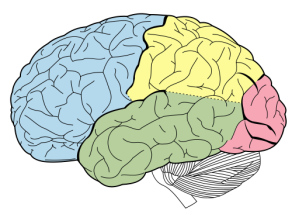 There is no doubt, when my tweens started crying, rolling their eyes, slamming doors, saying things I’d never heard them say before, and expressing dark thoughts, I momentarily lost it. I lost my parenting skills which I normally feel good about. I lost my self-confidence. I lost my cool. Who are these kids and who wants them for the next ten years?!

Today I was going to write about my favorite tips (so far) for raising tweens and teens, but science luckily intervened. While teeing up the tip post, I learned about some of the changes happening in the adolescent brain, reinforcing to me that I had to stop taking my tweens’ behaviors personally. I mean, I don’t take my toddler’s screaming and food throwing personally!

Toddler’s brains are undergoing major changes–growth, brain pruning, changes in connections. This calms down a bit in childhood only to pick back up again right before puberty (sigh), continuing through adolescence, which depending on the person can be defined as 10-25 years old (yes, that long).

So, my two oldest kids’ brains are physically and functionally whacking them out right now. What they need is not a beating, not a religious straight jacket, and not a pushover parent. They need encouragement, support, and reliability–and a parent with coping skills to give them just that.

Neuromaturation (Grow up, brain. Grow up.)

Adolescents (loosely defined as the ages 10-25) are NOT functioning on the brain I’m functioning on. From beards to body odors to brains, they are CHANGING. I’m going to reduce these brain changes to extreme oversimplification using some humor. Don’t try to talk to a neuroscientist using this information. And may my daughters and science please forgive me for manipulation of scientific facts. It’s for the promotion of survival of my progeny.

They are losing their minds. Yes. Literally. Brain gray matter grows just before puberty, and THEN about 1% per year is lost during the rest of adolescence! The body is pruning the brain’s neurons to make it a sleeker, more reliable, better functioning machine. (1, 2) So when you think they have forgotten everything you taught them—who knows?! Maybe they did lose that neuron and its connection. Or when you’re daughter makes an eye roll, maybe it’s a little twitch from another neuron being lost. Ha!

They’re animals. Well, kind of. It is commonly (although rather mistakenly) said that our limbic systems are part of our primitive, animal-like brain and our frontal cortex is “what makes us human.” Raw, gut-reaction emotions are generated in our limbic systems and then sent to the frontal cortex for tailoring of thoughts and responses with logic, rationalization, and planning. Well, research shows that adolescents have exceptionally active amygdalas, parts of the limbic system, and they have less connections from the amygdala to the frontal cortex when compared to adults. So I jokingly say that teens and tweens are functioning on their primitive, animal brain because their actions are guided more by their amygdalas (their emotions) than their frontal cortexes (logic and reasoning). (1, 3) They’re our dear, wild, little animal pets:

“Dogs and cats have different brains than humans. We should not think of them as furry people complete with human drives and emotions. Instead, we should look at them as having more child-like emotions and embrace their innocence. Only through compassion and understanding can we truly have a mutually beneficial relationship with our pets.” (4)

They need Prozac and 5-Hour ENERGY Shots. Their neurotransmitters and the receptors that are acted on by these neurotransmitters are in flux, including dopamine, serotonin, GABA, and melatonin.  We all know friends and family members who take anti-depressants, anti-anxiety drugs, and sleep-aids due to “chemical imbalances” in the brain. Well, adolescents have changes in these same chemicals as a normal part of their life. So should we be surprised by their moodiness and sometimes erratic behavior?  Dopamine changes make them more prone to risk taking. Serotonin changes make them more susceptible to mood swings. Less development of the inhibitory GABA system makes them prone to excitement. High melatonin levels actually induce them to sleep more; they’re not just lazy. I mean, they are. But they’re not. Please don’t buy them 5 Hour Energy drinks. (5, 6)

When I say they need Prozac, I’m not in earnest, but knowing that their neurotransmitters are indeed not as stable as they will become (hopefully) in adulthood helps us to be more accepting of adolescent emotional lability. HOWEVER, the fact of the matter is, suicide is the third leading cause of death in kids between the ages of 10 and 24, so we MUST be vigilantly aware of this risk and NEVER underestimate adolescents’ susceptibility to mental disorders such as depression. (7)

They literally see you mad all the time. You’re not mad all the time, you say? Adolescents don’t see it that way. A study shows that they see facial cues differently and are apt to misread facial expressions as anger, even if they’re not!  Surprise=anger. Fear=anger. Shock=anger. Sadness=anger. Perplexed=anger. One reason our teens are volatile and angry is because they think they see anger on faces all around them, including yours. Couple the hurt of one, thinking that people are angry with them all the time to two, weak connections to the frontal lobe so they can’t rationally modify their responses (and throw in some significant neurotransmitter flux)–and you’ve got a disturbance in the force. A real force to be reckoned with. (2)

Remember the time your daughter huffed and burst into tears when she asked you if you liked her outfit?  You barely even had time to turn around and look and she had decided you couldn’t stand it! Or the time your son asked for $20 to head out with his friends and you were trying to remember if you even had a twenty in your wallet–and he blew up in your face because you’re always judging him? What?

Sorry. You looked angry. Even if you weren’t angry, perception is everything in a relationship.

Adolescents between the ages of 10 and 25 are not neuromaturated. In some physically defined, scientifically objective ways, their brains simply are out of control. No excuses here. Simply an underscore of the importance for parents to keep it together and be in control of their own emotions and responses. To find ways to be an effective parent. To not take it personally.

Thanks for learning right along with me. Next post, I hope to look at some ways to keep my head about me so I don’t lose my tweens over the next 23 years. With my oldest at 12 years old and my youngest at 1 and ½ years old, I’ve got years ahead of me.

And please, get help for you and your kids if you’re feeling overwhelmed. Don’t try to go it alone.