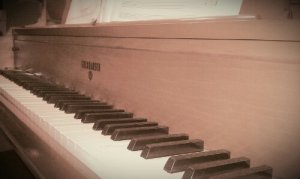 I came into their lives that day, and they came into mine.  I received matzah bread spread with jam each Passover.  And halva.  I loved chocolate covered halva.  I received books on German and books in Hebrew.  I received rights to a piano any time my pharmacy studies would allow.

He a German Jew.  She a Russian Jew.  She giggled when we talked about eating pork.  She’d never eaten pork.

He fled Germany when Hitler was rising to power.  He left his family behind.  They had a little shop.  His family, they were all killed.  He told me you must forgive to move on.  One time our apartment complex’s newsletter listed the famous people born in the month of April.  Hitler was one of them.  Mr. Bremler was not pleased at the inclusion of Hitler as famous.

In America, he entered the Army.  He became a translator, fluent in German.  He ate pork.  You eat pork in the Army or starve, he told me.  Letters kept us in touch as I moved around the country.  I always remember the large black and white photo of Mr. and Mrs. Bremler, too large somehow for the walls of their tiny apartment.  Their faces young.

One day I was pulled up out of sleep sobbing.  This I have never done before.  I’m not privy to the supernatural.  But this night in my dream, Mr. Bremler died.  Mrs. Bremler had died years before.

Today is our American Memorial Day.

Memory requires you to look back.  But it is what allows you to move successfully forward.