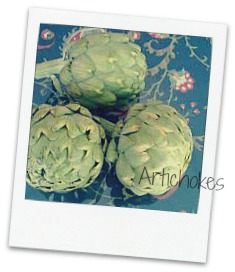 Vegetable Series:  When we changed our eating two years ago, I resolved to be afraid of no vegetable.  Not knowing how to cut it or cook it was NOT going to keep it out of my cart.  For a long time I’ve wanted to do a series of posts on all the different vegetables we have tried and what we do to the poor things.  May you, too, vow to try any and all vegetables in your supermarket!  Go get ’em, tiger.

Did you try a rutabaga?  Not yet?  Well, you’re going to get behind in this vegetable series!  Today we’re talking about trying an artichoke!

Now a fresh artichoke was new to me for sure!  Canned artichoke hearts?  Yes.  Artichoke and spinach dip?  Absolutely.  But never a fresh artichoke!  Once upon a time, my daughter and I  were shopping the produce aisle when the artichokes caught her young eye.  She began asking and begging me to buy some artichokes.  Here I am, The Vegetable Queen, making excuses to not buy those artichokes for her.  I don’t know what to do with them.  We may not like them.  They’ll go bad in the refrigerator before I figure out how to use them.  But my hypocrisy galled and sickened me, along with a smirking customer bystander who mockingly reassured me they were “quite easy to make…just steam them.” 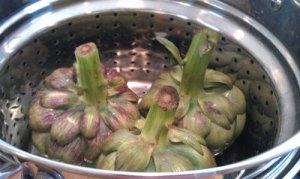 So we bought those artichokes and we winged it!  I didn’t even look up how to make them or eat them.  I just steamed them like the good lady in the produce aisle said to do.  I’m going to tell you how we made them and ate them.  I don’t think it’s “the right way.”  But silly-sally on that.  The right way.  Pshaw.  Just get the blasted vegetable cooked.

I want you to know up front, artichokes are a process to eat–but in a good way.  Like a “family-popcorn-night” fun kind of way.  Not at all like broccoli or cauliflower where you slap it on the plate, get your fork out, and gobble it all up.  We have a lot of fun sitting around the kitchen table eating our artichokes as a family.  I hope you’ll give them a try!

Choose artichokes that are closed rather than open as they are fresher.  Also, don’t be afraid of purple markings which indicate that the artichoke received a bit of a frost in the field, which will make it more tender and flavorful.  (You can see those purple “blush” marks from frost on my photo up there.)

Wash artichokes.  Place artichokes (careful of any sharp spines that may prick you) in your steamer pot and steam for about 20-30 minutes.  You know they are done when you can pierce the base right above the stem easily with a fork or knife.  Allow to cool enough to handle and serve!

What?  No cutting?  No chopping off the tops?  No clipping the spines?  Nope.  Go ahead and do that if you want.  I don’t care.  But time is a premium commodity for me, and I’ll bet it is for you, too.  Since making these the first time, I have tried chopping the tops.  I noticed no difference with chopping the tops or not chopping the tops.  I have never clipped the spines on the leaves, although it looks really snazzy that way.  The spines soften up in the steaming process and cause no issues.  So I don’t clip those either.

(Note:  Most sites will tell you to cut off the top, trim the stems, pick off the lower hard petals, shear off the spiny tips of the petals, put some herbs in your steaming water, brush with lemon juice, and so on.  I know that may make them “better”–but what good is “better” if you never make them because that’s way too much work? And the kids love them this way–and so do my husband and I?)

So how do we eat them?

There are three parts to eat:

With an artichoke, you literally pull each petal off, one by one.  Dip the pulpy, whitish end of the petal in oil (or butter or mayonnaise) and sprinkle it with salt. Then, pull the end of the petal between your front teeth to scrape off the white, soft, creamy artichoke pulp.  Keep an empty plate in the middle of the table to put the artichoke refuse on.   Repeat this process until you get to the choke, a fuzzy-thistly topper to the artichoke heart. 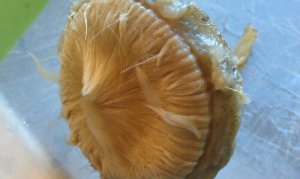 The fuzzy choke (not edible) on top of the artichoke heart (deliciously edible). 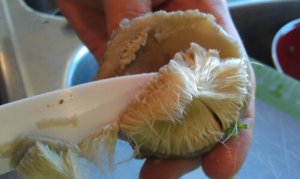 Peeling the choke off of the artichoke heart.

At the choke part, you need to carefully separate the choke from the heart.  My kids always hand off their artichokes to me expectantly when it’s time for the choke to come off their artichoke.  I use a knife to carefully lift off the choke in one piece.  If it doesn’t separate well, I just use the knife to slice off the choke, but you lose a little of the delicious artichoke heart.  Whatever you do, don’t eat those thistly fuzzies.  They are not good.  Dip in oil and sprinkle with salt.

At this point, the great stuff is gone, but the top of the stem is often tasty and edible, too.  If not, and it’s too fibrous, your artichoke party is over.

The Lazy Answer:  I Don’t Know

Dr. Goulet, my intense and fierce general surgery staff doctor back in the day, always barked at us, “Don’t tell me ‘I don’t know.’  That’s a lazy answer.”  (Ow.  Trust me.  We learned to never say “I don’t know.”)  So don’t be lazy.  Don’t be cowardly.  It is JUST a vegetable.  Add to your vegetable repertoire!  Try artichokes, and then go back and try rutabagas!  I don’t care.  Try whatever you want, but break out of your spinach, carrot, and broccoli rut!  And don’t let “I don’t know how” ever be your ball and chain.

More in the “How Do You Eat That Vegetable?” series: