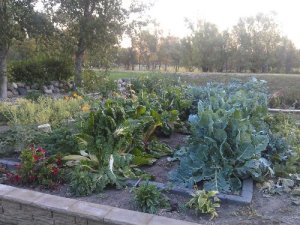 I have no photos of our garden in its prime, only its decline.  Even in its turning down, it’s providing us with great produce.  I will take a few posts to feature photos from our garden and what I did with each item.

It is a raised bed garden, which helped keep the critters out.  It also helped with drainage.  It provided me with hours of outside purpose and vitamin D.  Two very vital supplements which are free and life changing.

Okay.  If you’ve followed me on Facebook or this site, you will know that Swiss chard gets the blue ribbon grower award.  Nothing stopped that stuff.  Not moths.  Not grasshoppers.  Not heat.  Not hail.  I cannot find enough ways to use it or enough people to give it to. 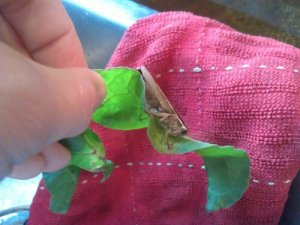 Here are my two favorite ways to use up Swiss chard.  It is a powerhouse of a food.  A true powerhouse.

One is OILY GREENS.

Wilted Swiss Chard Yum is the second.  The dressing for the Swiss chard is versatile.  Serve it over spinach, lettuce, endive, or any number of other greens.  For oxalate watchers, Swiss chard is like spinach, and you ought to opt for Option 2 on the recipe (which has you put the chard in the pan and cook it).

About 4 cups of washed Swiss chard, taken off of the stem and cut with kitchen shears into very small pieces  (Conversely, you may leave on the stems if you wish.  They are often tough.)
Bacon and drippings from a 12 ounce package of bacon (about 1/4 cup of drippings)
Onion, about 1/4 cup chopped
Apple cider vinegar, about 1/4 cup
Honey, about 3 tablespoons
Salt and pepper to taste

Place the finely chopped Swiss chard into a large heat-proof bowl.
Cut the bacon into small pieces and fry in large frying pan until brown and crispy.  Remove bacon to a plate lined with a paper towel.  Leave the drippings in the skillet.
Saute the chopped onions in the drippings until golden brown.
Add in the honey (carefully as drippings may splatter–ouch!) and stir well until the honey is all dissolved.  Stir until the mixture is thick, maybe even bubbly.
Add in the apple cider vinegar (carefully as more splattering may occur).  Continue simmering until the mixture is reduced (thickened) somewhat.  Season with just a shake of salt and pepper if you’d like.
Here you have two options.  Option one is to pour the dressing over the greens in the bowl and then mix to coat.  Option two will wilt the greens even more–just add the greens to the pan, stir a few times, and continue cooking until they are as “wilty” as you like them.
If you have bacon to crumble on top, then by all means, add it!

Family “gustar” report: Great adult recipe, but my kids only take the mandatory bites.  Visiting grandparents and aunts like it a lot.

2 thoughts on “Finishing up the Garden: Swiss Chard (Again)”