My gluten-intolerant, dairy-intolerant friend doesn’t like to bake or cook.  So when I sent some of these home with her, she asked me, “Do you know how long it’s been since I’ve had a cupcake?”  That tore at my heart!

I started with a chocolate cake recipe from The Gluten-Free Almond Flour Cookbook by Elana Amsterdam. 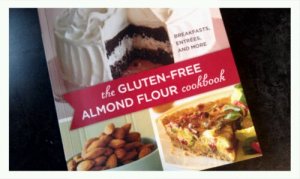 But it just didn’t have a strong chocolate flavor.  So I added more cocoa.  And it sank too much in the middle.  I tried adding another egg.  Seemed to do the trick.

It is best to let these sit overnight, although we downed quite a few on bake-night.  Ours came out of the wrappers terrifically the day after they were made.  Not crumbly a bit.  I tried making them in fancy white paper cups from Wilton and cheaper normal cupcake wrappers.  Cheaper worked best.

2 Cups of Almond Flour (Honeyville has been best for me)

1/3 cup of cocoa, on the scant side (love Penzeys brand)

1 teaspoonful of cardamom (may be omitted, but it enhanced the chocolate flavor)

3 eggs, divided into whites and yolks

2.  Mix dry ingredients together in a large bowl.  (Please note that I tried running the cocoa and almond flour through a sifter to see if it

contributed anything to texture.  Texture is good, but sifter didn’t seem to make a difference for the Honeyville flour.)

4. Whip the egg whites until stiff peaks form.  Set aside. 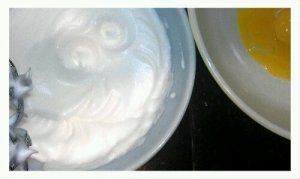 5.  To the yolks, add the honey and vanilla and mix well.

6.  Gently fold the yolk/honey/vanilla mixture into the whites.

7.  Gently hand-mix the dry almond-flour mixture into the egg mixture.

8.  Scoop batter into prepared muffin pans (I used a 1/4 cup measuring cup and that filled them about right.)

9.  Bake for 20-30 minutes until the tops are set and a toothpick inserted into the middle comes out clean (this is usually about the time they start really smelling great and your mouth is watering for cupcake NOW).

10.  Allow to cool in pan a bit before trying to remove.  Centers may sink a bit as they cool.  Ours didn’t sink too much.

Addendum:  I made this cake yesterday (11/12/12) as a cake.  I made the recipe 1.5 times as much (rounded the eggs up) and poured into round 9 inch cake pans (grease well).  It was awesome–I used a coconut milk ganache layer in the middle and a boiled honey and whipped egg white frosting.  Awesome.  Again–good the first day–but the second day–absolutely the best.  Moister, richer, just…”MMMM.”  Awesome. 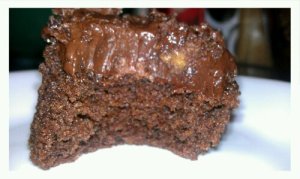 Remembered to take photo of last cupcake so you could see the crumb/texture. Not really decorative as I just slapped lots of icing on for me to eat! Sorry!

(Fly by the seat-of-your-pants recipe.  Ingredient amounts will not be exact.  It will require taste-testing and adding more of this or that.)

Try Googling the internet for frosting made of lard.  I did and didn’t have too much success.  Lard for the actual pastry, cake, or cookie–absolutely.  But lard for frosting–“YUCK–DON’T DO IT!”  An actual quote from one site I Googled.   However, one-track-minds can’t put ideas to rest.  (If you’re on GAPS, SCD, or you’re a homeschooler–you know you’ve got one of those stubborn, one-track brains that won’t take “no” for an answer.  You know it.  You know what I’m talking about!)

Well, we needed a dairy-free creamy, chocolate, melt-in-your-mouth frosting that was GAPS/SCD legal (cocoa powder is not really SCD legal–I conveniently hop from GAPS to SCD or vice versa to suit my fancy!  LOL!  But seriously, only if my goals are being met. And right now they are!  Yippee!).  I had lots of freshly rendered lard.  Snowy-white and yelling at me, “I’m perfect for frosting!  Try it!”  So I turned on the Kitchen-Aid and whipped that lard until light and fluffy.  Beautiful, really. 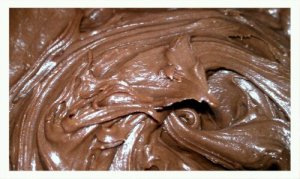 About 2-3 cups of refrigerated pure lard, no preservatives or additives

About 1/2 cup of cocoa powder

About 1 tablespoon of vanilla

1.   Whip cold lard until light and fluffy, about 5 minutes or so.

5.  Add some more of whatever is lacking. More chocolate?  More sweetness?  More rounding out with vanilla?   Get the paranoid feeling you can still taste pork?–that’s what the almond extract is there to mask:).  Obviously as you add the needed honey, the frosting will get thinner, mine was like the consistency of a brownie mix.  But it wasn’t thinner than cake batter.

6.   Put it into the fridge to chill.  Let chill for about an hour. 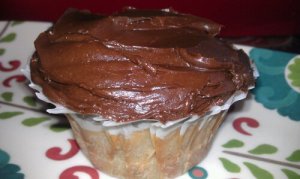